Last year, I was engaged as the fight choreographer in NTU’s annual martial arts performance held in Sentosa.

The first part of the video shows the actual day performance. And the second half features behind-the-scenes of the 5 week journey preparing the performers for the show.

These performances have been a yearly affair for them. And the customary concept; is a martial-arts themed performance featuring martial arts showcases and stage combat sequences. All performed to the dramatic harsh lighting illuminating their sculpted topless costume.

There were to be 6 performers, and the show to be between 5 – 10 mins. I decided to settle for a 7.5 minutes blocking, separated into 4 main blocks.

A traditional wushu sequence called the 五步拳 (Five Steps Fist) executed in synchrony, to start the performance off slowly. Hence setting an initial tone of a disciplined harmony, in order to create a bigger contrast in the second act.
(Roughly translates to ‘5-Stances’, this is the basic curriculum in Shaolin Kungfu originating from 长拳, ‘Longfist Style’, an external style from northern China)

From the relatively calm and regulated first act, we jump straight into a hard-hitting 1 v 1 stage combat. With a shift in the tone of the music from a more traditional wushu performances track into an almost-cinematic action track.

I had then decided to assign a different style of martial arts to each performer to create more visual contrast. Styles inspired by boxing, K1, Muay Thai, Panantukan, Judo and Brazilian Jujitsu.
Each pair take turns to showcase their styles, whilst the other pairs stand frozen. In order to reduce visual distractions to pull the focus of the audience across the span of the performance arena.

The 1 v 1 would by then have solidified the tone of the combat to the audience, thus showing a peek into the style of each performer’s martial arts. And here’s where they’ll get to show off each style in their entirety, by pitting them against a relentless cycle of combatants.

Ending on a high note, we have each performer craft a line. This is taking a leaf out of what is done in XMA/Tricking usually.

Whilst we didn’t have a lot of time to develop each performer into the more advance realms of acrobatics, we had each performer put together all their best kicks. Crafting a lateral sequence to create something unique to each of them. And then wrapping it all up with a end pose, the music fades to a dramatic closing.

The performers are Guang Siang, Bernard Lee, Ja Brian, Trevor Ng, Adam Chua, and Chua Yue Da, all whom which are students of NTU. They had dedicated a large portion of their holiday break time to not just rehearsing for this show, but to bulking and toning their bodies to achieve the physique for the performance. Their dedication is commendable, and I was super touched to witness their final show, watching their growth from the first week.

None of them have had stage combat experience before this, hence we had very much started from the bottom. Apart from Brian whom had learned boxing prior, and Adam with judo training. The rest had zero martial arts experience. It was a daunting task initially, but thanks to their commitment and great learning attitudes, they really developed a rather solid grasp for stage fighting!

The first challenge was getting them to hone the fundamentals and their respective styles, and on top of that, the basics of stage fighting. All of that within the first 2 sessions of about 3 hours each. I would perhaps have called it an impossible task before. 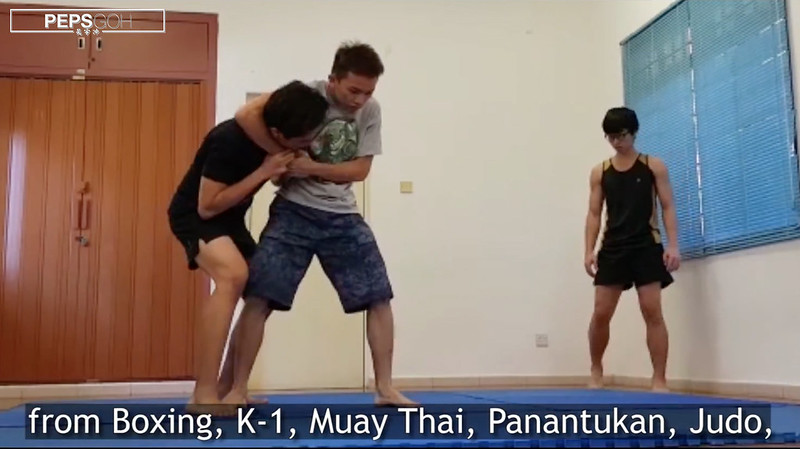 The second was to get from the fundamentals to the tougher techniques like slams and high kicks. That’s a HUGE leap for anyone in any span of time, much less to say 6 sessions in a couple of months. And also, doing it was one thing, but doing it safely? That’s a whole ‘nother ball game!

To deliver a 7.5minutes martial arts show with a team of almost entirely zero experience initially, with limited rehearsal sessions on the clock was a brave pursuit to embark on. And they had pulled it off, all to the credit of their own hardwork and dedication.

The final challenge was accomplished too by their own commitment as well. Performing fight sequences and slams upon uneven sand, topless. One can only imagine the abrasions and sand flying into their mouth and eyes. Yikes. Kudos team, I’m so proud of y’all!