Being in the industry for several years, I feel that Singapore’s action scene is at just the right time to bloom, with more productions daring to venture further into action and including fights scenes and stunts into their stories. In the light of that coming progress, it had became more and more important to educate and equip actors with the proper tools to keep themselves safe on set.

Hence, the birth of this Screen fighting Seminar for aspiring stunt actors.

So what do you learn from this three day screen fighting seminar? 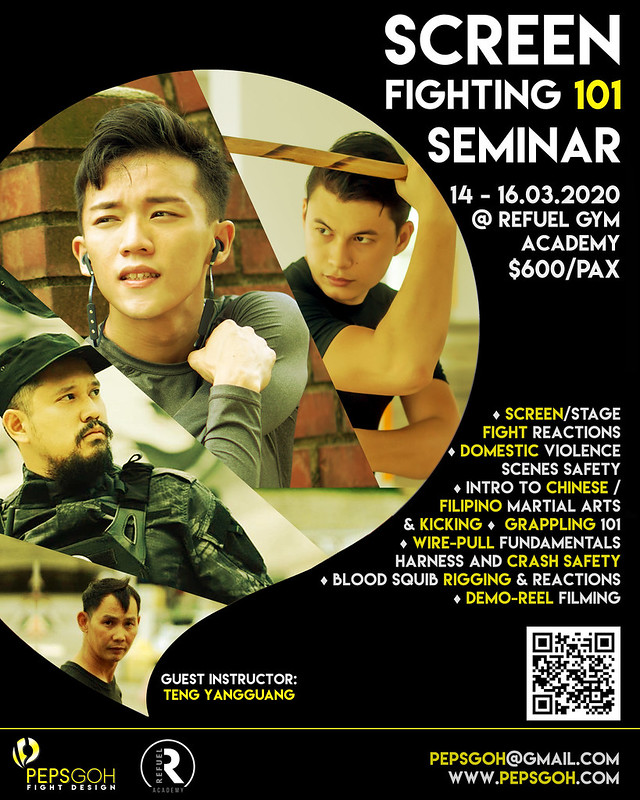 In this Screen Fighting Seminar, participants will be taught the foundations of hand-to-hand screen combat and the safety aspects of a screen-fighting performance.

There will also be an opportunity to experience and learn to operate equipment used in screen-fighting special effects such as wire-pulls and deployment of a blood squib machine.

As a capstone, participants will perform in a designed stunt choreography, which will be professionally recorded and edited into a demo that participants can use for their own casting purposes.

So if you are a budding actor who wants to learn how to stay safe when doing action scenes, or an actor who wants to venture and try out what it takes to be a stunt actor, this will be a basic introductory course where you are expose to the essentials!

This three day workshop is suitable for both male and female, aged 13 years and above, with or without any martial arts and/or dance background.

Disclaimer: Rome wasn’t built in a day, so this seminar will not transform someone with zero martial arts into Donnie Yen. However, this will be a good brick-laying foundation course for one to gauge his passion and talent in screen-fighting!

Want a Sneak Peek? Let the Instructors Tell You What You Will Learn

Screen Fighting Seminar will be held from 14th March 2020 (Saturday) to 16th March 2020 (Monday). The 19 hour workshop will be carried out over three day, and students will be able to cover the basics of various commonly used techniques in local film and stage fight.

He was the action designer of Muay Thai Girl that featured 11 different fight scenes pushing the frontier of what has been done with female oriented action scenes in Singapore. Worked on and understudied with Taiwan’s stunt team in the Jack Neo’s first action feature film; Killer Not Stupid (2019).

As an actor and stunt performer, you might find Kasimir Poh Cieslak a familiar face on many Singapore’s TV commercials eg. Canon, Health Promotion Board, Scoot and Singapore Tourism Board. He has also produced, coordinated and performed in local action short films such as Timecase and Bounty.

Behind the scenes, he also worked on stunts for various local TV channels and movies, such as Code of Law, Vittai 4, 卫国先锋 (When Duty Calls), 爱.不迟疑 (My Teacher Is A Thug), Days of Disaster, Ah Boys to Men 4 (ABTM 4) and 女鬼爱上尸 (When Ghost meets Zombie).

With a black belt in Judo, Alvin Richard was a competitive cheerleader and Capoeira dabbler.

He has been working with Waterworld Show at Universal Studios Singapore (USS) under Action Horizons since 2013, and has performed for seasonal shows such as Jurassic World and Halloween Horror Nights.

Locally, Alvin Richard has acted in films such as Ah Boys to Men and Killer Not Stupid, TV series like Incredible Tales and Journey With Me, and short films, most notably Purple Light. He most recently served as stunt coordinator for the the Channel 5 TV series Mixed Signals.
Find him at @iammistera

Yangguang is a stunt director providing stunt services to MediaCorp and event productions for over a decade. From vehicle, to fire and high fall stunts, he is also the leading service provider in wirework locally.
Find him at Stunt & Stilt

There will be a maximum capacity of 20 pax for this class due to safety reasons. So sign-up for the Screen Fighting Seminar by clicking on the button below before the slots are gone!