It’s been some time since I shared on my site some of my works. It’s been an eventful year and I’m in the midst of rebuilding my website, and also sorting out my past works when I found that I had never shared my experiences working at the Universal Studios Singapore for Jurassic World show with Action Horizon, a Singapore-based Hollywood stunt team. 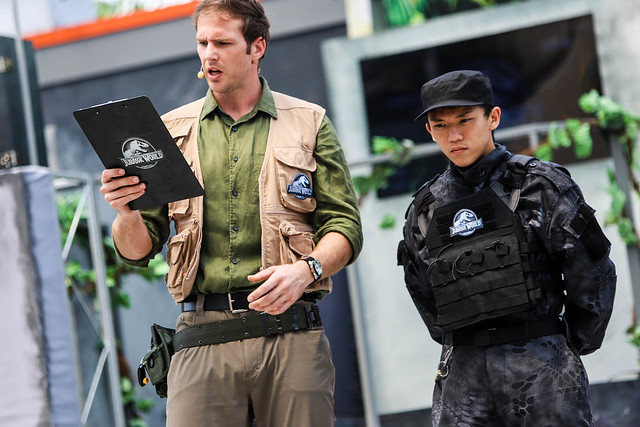 I was really glad to be able to work with the team as I’ve missed the opportunity six years ago as I had to serve the country. Yes, that’s the team behind the popular WaterWorld performances you watched when you enter Universal Studios Singapore. The team is extremely professional and they emphasise a lot on the performers’ safety.

Although it is something that you would think is a basic requirement, I’ve discovered in my past several years in the industry that it isn’t always readily available with other stunt providers. 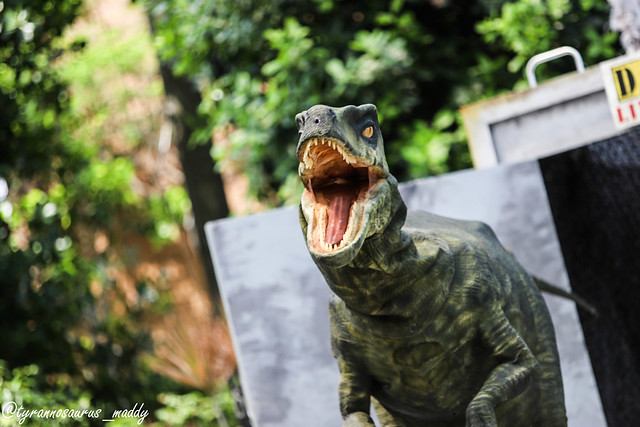 First of all, I just want to point out how much of a resilient warrior each one of the performers within the Velociraptors are. It’s really really warm and stuffy within, and the entire rigs are over 20 kgs if I didn’t remember wrongly. And all of it rests painfully on their hips, and they have to fight to remain in balance while at the same time performing the raptor-like movements, while controlling the head, mouth and eyelids. They had to reach their marks on stage within a margin of a feet, while having severely limited range of sight. It was really difficult.

Now let’s go on to chat about my roles much less physically gruelling roles as Ranger 1 & 2. Here in this video you can see how the Ranger 1 role goes.

In this role, the key stunt is the backward wire pull as you can see here. But as with all good shows, the climax is only as good as the establishing scene and the build up to the end. There’s an elaborate opening scene meant to instil in the audience the idea that there was something wrong with the Velociraptor cages, so that when the raptor does burst out, it was an anticipation, and then a cathartic delivery of the expectation.

One of the selling point of the Jurassic World show was the technical challenge of the climax – the part where the ranger went from being a free body, to being rigged up with the wire right on the stage in front of everyone’s eyes. Before you continue reading, try and spot in the video when and how that moment happened.

There you see it? Simple, but effective. Just like stage magicians do, show your hand, and then redirect their attention to the raptor, and when their eyes are back on you, the trick has already been set up. All you gotta do then, is to hit your marks on the stage while staying on script and in character, and wait for the tail whip and the wire pull.

The second role in which we don’t see here in the video so I’ll go over it briefly;
It was a 12 – 14 feet drop with a plushie of a velociraptor that I’ll have to “puppet” in the act of it attacking me, and take the drop into the Velociraptor cage. That was a really fun part.

You get to tussle with a plushie and play pretend, and then take a fun drop, and wait till the last moment to pull a 180 turn and poof into a comfy stack of crash mats layered till 5 feet high.

Jurassic World was one of the more fun and relatively relaxing shows that I had to do! It was a good time ❤ 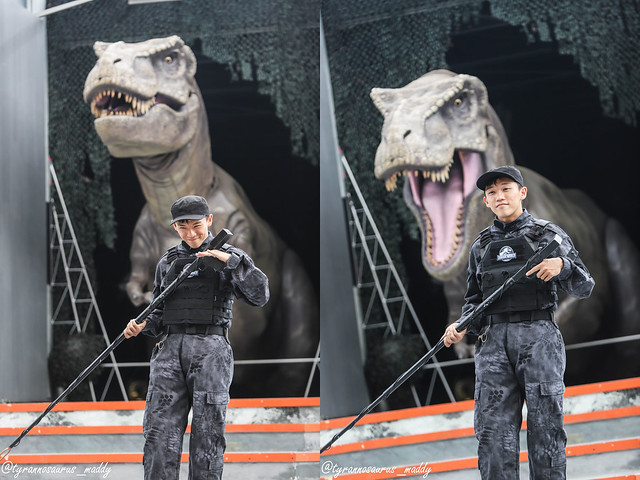 Video and Photo credits to the awesome @tyrannosaurus_maddy, thank you for going out of your way to shoot these for me!

Check out this link for other live shows or live performances that I was involved in!